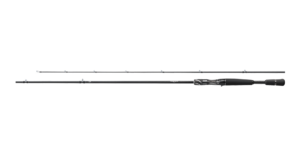 STEEZ’s famous machine gun cast type II has undergone dramatic evolution with new rod technology, and has been reborn as a rod that allows you to experience a different dimension of pleasure. That is the 21 machine gun cast type II. Compared to the 07 model, which bends the entire rod parabolic to produce accuracy, the 21 model gained a degree of freedom in taper by significantly improving the accuracy performance by installing the X45 full shield. While maintaining a strong tip that does not lose the resistance of heavy wire bait, by concentrating the bending position at one point during casting and adding tough butt power, it suppresses body shake during casting and keeps the axis stable. It is now possible to shoot from any angle. In addition, the retrieve sensitivity of the wire bait slack line retrieve and the hooking performance for hooking a short bite during slow rolls have been dramatically improved, dramatically improving the ability to respond to warming compared to the 07 model. A versatile rod that has all the necessary elements for a machine gun style has been completed.