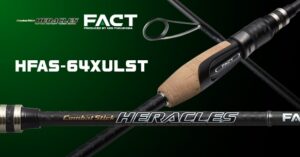 The world of less than 1 gram is clear. Ultra finesse that enables operation in millimeter units.

It can be eaten only with an ultra-light rig that uses less than 1 gram of sinker…Fishing pressure that increases due to frequent tournaments and technological improvements in anglers, and also toughness caused by sudden changes in conditions, which causes anglers to suffer. One scene of modern bass fishing.

“But if you make the rig smaller and lighter, you can’t eat it. Now, in such a situation, you can’t eat it unless you operate the rig in millimeters.” Fukushima Ken’s ultra-high pressure that supports another dimension of finesse strategy Fact 64X ULST is a rod for confronting exposed and silent fish.

The solid tip set in the Extra Ultra Light, which plays the role of a sensitive sensor, captures minute changes and transmits them to the hand, eliminating the no-touch feeling that tends to occur with the ultra-light rig. The sharp feeling enables super delicate operation, and also rig operation in millimeter units, leading the bitter bass to a bite.

At the same time, it firmly discriminates the atari of the ultra-light rig that tends to be small and unclear because it can be sucked in from the deep range with a weak force. In addition, the white painted tip makes it easy to visually capture even minute changes that cannot be seen at hand, making it possible to bring bites that you have never noticed before into hooking.

Furthermore, by minimizing the 4-axis reinforcement of the bat, the entire rod bends and absorbs the shock during a fight. While maintaining the necessary and sufficient power in the finesse, it reduces the risk of breaks in the light line and the breakage due to the dryness of the bus.

Not only a tough large mouse bus, but also a small mouse bus with a delicate and sharp bite, which is a high advantage. The world of less than 1 gram, which was previously out of focus and blurred, becomes clear. You can eat a bus that you couldn’t even do until now by operating in millimeters. Fact 64X ULST is a high resolution ultra finesse rod that allows you to control ultra-light rigs at will.