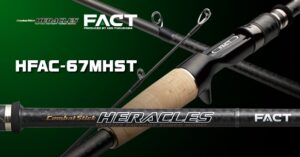 Operability outside of common sense to freely operate jigs and worms.

Fact solid tip series created by Ken Fukushima, who has won many tournaments by making full use of lures such as rubber jigs and worms, and has the ultimate operability and ability to eat. Among the lineup, the model Fact 67MHST was developed with an emphasis on operation. Not only the slow operation that Solid Tip Rod is good at, but also the quick action that invites a reaction bite.

It is a solid tip that is generally said to be hard to move quickly, but this rod is different. The solid part’s thickness, length, taper, and the joint with the tubular belly have been taken care of to obtain a different dimension of operability. By adjusting the swing width and speed of the rod, you can control the lure’s movement freely, compared to the tubular tip, which tends to have large and fast lure movements.

For example, the reaction bite induction technique that Fukushima is good at, and the operation that requires delicate rod work to move the football jig “fast” and “short”, you can do it with this solid tip. Of course, it is the best match for fishing with any kind of operation system such as slow pulling Texas rig, shaking heavy down shot rig in one place, etc.

The versatility unique to MH action and the finesse of solid tips are used to cover various situations. You can control the lure’s movement as you like, let it eat with solid tips, and hang it with tubular berries. Out of common sense operability, operation system special fact 67MHST.