A work created as a result of Haruhiko Murakami’s research to maximize the advantages of AGS (Air Guide System). In a nutshell, it is a boat for fishing 50 up with a 0.8-PE line + 1.5-Flower leader. “It’s soft and strong,” said the person, as always, in a unique way of expressing it, but in a word, the power changes imaginatively and reflects the angler’s intention faithfully. So when you want to use it as a soft chopstick, when you want to use it as a strong chopstick, you will hear what you say. It has the ability to “wind the reel from scratch and turn the fish’s face towards you”.

The base is the HL-Z 682LFS-ti Tsukake Midge direction, which is still handed down as a famous name. By collaborating with AGS, we saw a further evolution of the PE PERFORMANCE concept. Daiwa’s original AGS and Haruhiko Murakami’s theory merged on the premise of using a spinning reel of size 2000 or smaller and fine yarn PE to reduce the line trouble that tends to occur in the PE line to the limit and handle the ultralight rig comfortably. Made with original guide settings. The lightness of AGS maximizes the potential of the blank, and realizes a sharp swing that cuts through the sky when casting. As Murakami has described as “going straight and straight”, the feel is a different dimension. And the line emission with less blur of the tip part creates an accuracy cast, and the rigidity is higher than general titanium and SUS frame guides, so the sensitivity is also improved.

In addition, the tip is equipped with a supple and sensitive mega top, and the tubular is equipped with X45, which suppresses blank twist to the limit. The sensation is close to all-solid, but the belly-bat is tubular and surprisingly light. Even when the fish is hung, even if the guide does not sag, the sea bream works with the chitin and gradually turns from the tip to draw a beautiful curve. This stubborn bend is the result of V-JOINT, the crystal of Daiwa’s technology, and the spatula. The extended midge direction to the exquisite length of 6’10 ”has made it possible to handle a wider range of fields. Surprisingly, the tip of a twitch or jerk of a plug such as a shad is not lost. As a result, a light rig universal “play kite” that seems to be no more than that is completed. “I want to play comfortably with this kite today …” It is a glimpse of the world of such hobbies. 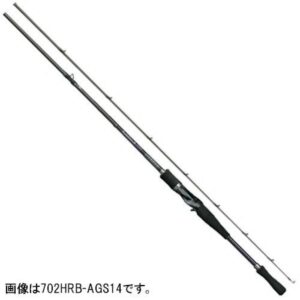