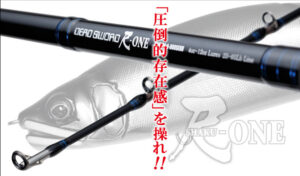 “Dead Sword Scale-ONE” is designed as a rod for the largest series Giant Bate “Jointed Claw 303 Scale-ONE”. It is a “super monster” rod that combines super rod-class rod power and giant bait operability. When using the Joined Claw 303 Scale-ONE, the existing rods can not be operated or cast due to lack of power, and the potential of the Joined Claw 303 Measure-ONE can not be fully realized. This Dead Sword Scale-ONE places importance on “power”, “operability” and “good handling”. As well as casting, it is important to operate the jointed claws, “roll”, “stop”, “flow”, “jerk”, etc. In order to facilitate various actions such as grip length, grip finish on rod details such as reel sheet The It is the ultimate one for manipulating the “overwhelming presence” of Joined Craw 303-ONE, which is assumed to be cast, action, and landing.