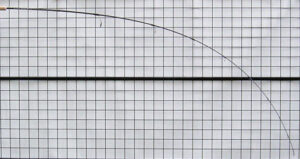 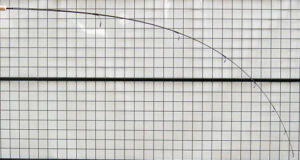 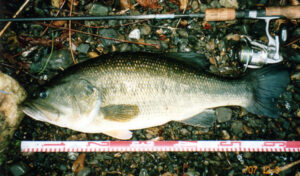 This is the fishing of Super Bronzeback.
However, rods that allow for fishing are not commercially available.
If not, let’s make it!
The rod making that began in this way.
I made a rod to catch a bath that can only be obtained with this rod.
“Alivel”!

Year big bus between the water temperature is presumed inhabiting depth field is stable low, lower the temperature of the shallow portion, different depth ranges to March early spring late autumn temperature difference approaches the depth field of water temperature However, it is thought that there will be more and more going out to shallow for food and minerals. Focusing on the time when the water temperature stabilizes at around 6-8 ° C, the fact that you can catch many solids that are not scratched anywhere in the 50-60cm range is more than always the big solids inhabit the area. Inhabit other areas, but when certain conditions are met, it will be there. ” In addition, when the winter is about to pass, and the minimum water temperature has been recorded, and soon after the Bribli mother bus ready to spawn, aiming for a shallow, the stock of big buses in a particular area spot (and more However, it is thought that it will be a considerable number until around May when the spawning season is at its peak.

In the early 90 ‘s, there was a genius angler in Ohno who caught more than 30 UPs in Hubei’s land fishing during the third year. He is at the opposite end of the pro tournament that competes in the same place and at the same place, which started in a lot of expectations at that time , “where there is a super guy, the time when the super eats the most In addition, we developed fishing called ” fishing supermarket with lures preferred by supermarkets” . Big bus hunter. Fishing a big bass and rewriting Japanese records with your own fish are the eternal dream of a big bass hunter.

A fisherman with confidence in the rumors who heard the rumors gathered at him through the “Oh photo tournament” and tried to challenge him and overcome him. If you are good at fishing and bet on youth and compete with each other, your ability will naturally rise. They are said to be able to catch big bass to catch big bass, such as top water plugs such as big buds and zala spooks, minnows such as latrine logs and bang oos, spinner baits, rubber jigs, and many kinds of worms (especially fat gitts, gidd bugs, Saw bugs, long straight worms, and newcomers such as sluggo, gambler studs, and squibter fish such as skier fish). .

The fishing method that arrived after repeated trial and error was fishing with spinning rods, mainly finesse but strong “stick bait with jig head”. The reel was overwhelmed by Daiwa’s tournament 3000 because of the drag performance that came out in response to the pulling power and the lack of yarn twist, but many rod manufacturers tried various rods.Among them, from the balance of the power that can be exchanged with the big bass, the ease of a series of actions to take out a dandruff and wind it up, the length of the rod required from land fishing, etc. 757S was supported.

And rollers, Luxe, the model change to Luxe “Comer”, because it makes use of a light blank material a more needles, so far action has become not put out.

Therefore, “Ono” decided to request the continuous production of the first Luxe 757S from Gamakat.
First of all, the custom-made rod is a model (ver. I) in which the original original guide has a diameter of 25 mm.
Second, a model (ver. II) in which the gun smoke stainless steel SIC guide is changed to a gold cermet ring.
Thirdly, since the first grip was finished, a model with a camer (camer is a telesco spec) and changed to an offset grip type (ver. III. Logo color and thread trimming changed to silver) .
Finally, a model (ver. Ver) with a titanium frame SIC guide set in a new guide concept style was sent out to the same blank.

La grayed zero 757S is there a good rod suitable for this fishing There is only selected from among a number of rod, that has passed the years after the initial design, that the weight is heavy, such as that want a little more length In addition to repeating custom orders for Luxe, Ohno had repeated trials in search of rods exceeding this.

Blanks are made. Wrap the guide. Go out to the field. Put the fish. It’s not just fishing.
・ Aiming for a big bus, is it possible to multiply it and bring a bus?
・ Is there a power that does not allow the big bus to dive and bounce?
・ Can Line Slack be released rhythmically?
There are a wide variety of checkpoints, but the test will not proceed unless the target fish is applied. Many times I made a sample and tested it, but the demand for “Oh no” was high, and I couldn’t make a 7.2ft model that passed.

Chi ago Youdo five years, “I want to do a jig head by boat, but the thread there is no rod put out dandruff in well rhythmic” the voice of the had been asked. Therefore, in order to overcome the stalemate, we decided to take a break from the development of 7.2 ft. And accumulated the experience so far and switched to the development of 6.5 ft. Model. The field test was completed by staff member Kusa Watanabe. The rod builder brought the worms, jig heads, and O Nylon Line No. 2 mainly used, showed the usage, and handed them directly. I experienced it as a builder. The resulting sample was almost satisfactory. Even so, Arriver65 was finally completed after several samples.

Its to this time completed in the “Arriver 72” reach, based on the development of the completed “65”, that to develop it, while having the power that exceeds the bat power of 757S, to finish lighter than it I was able to. Lighter rods should help reduce anglers’ fatigue in harsh fields and help maintain concentration. During the field test, staff member Watanabe Kusa catches from hooking with the perfect fish such as 61.0㎝, 58.5㎝, 58.0cm (all use 1 / 32oz jig head, stud 5in, ono nylon 2 and igist 2508) Through this exchange, I was able to confirm the potential.

Also, considering the style and preference of fishing, we decided to prepare two types of guide settings following the original 757S. Even though they are the same blanks, the guide specifications and settings are different, but they feel like different rods, but there is no difference in power.

One is a specification that uses heavy stainless steel LVSG frame / SIC guide because the traditional swing width is important (top photo).

The other is the new guide concept specification of the titanium frame T-YSG / SIC guide.

Both models adopted the ocean top MNST with less thread entanglement in the top guide, and the YSG30 was adopted as the former guide in consideration of matching with a large diameter spool (assuming Daiwa 2508 and Shimano C3000S). For comparison, only the guide part is extracted and synthesized).

This fishing, but appears to be seemingly finesse fishing, “in the fish that are in that area, in order to kill the largest solid, what kind of fishing it is one the most effective, verification through real fishing It ’s a strong fishing. Therefore, in order to produce results with this fishing, it is indispensable to go to your fishing spot and understand it well.

“Oono” prepared a rod for that purpose. After that, the angler just stands on the field with Arriver. 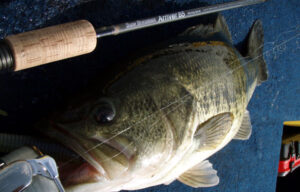