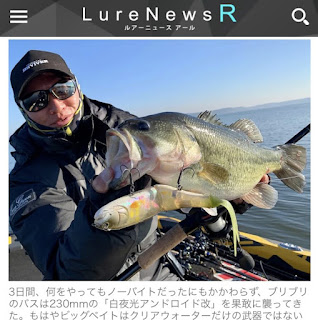 Katsutaka Imae it notorious for modifying his baits to achieve different actions or utilities. One of the most interesting Mods he posted was what he used in the King of Kings tournament in December 2021. Though he did not win the tournament due to subpar conditions that plagued the entire field. He managed to get 2 quality fish to the scale and was the only angler in the field to commit to the big bait game from start to finish.

The Imakatsu Ayuroid SG is a classic glide bait offering that excels in the 180mm class. Not only does it glide well out of the box, but it can be tuned to fish as a top hook model which alone makes it unique to every other glide on the market. But this tune isn’t about the glide, it’s about a deadwalk / jerkbait action that makes it unique to fish it tight to structure as a cover glide. 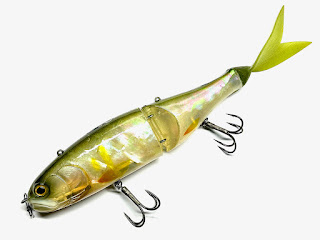 As you can see above, Katsutaka fished this bait near docks, and shoreline cover where bass would hold tight in dirty cold-water conditions. This was probably one of the longest and most boring events of JDM fishing I have watched; the tough conditions made the fishing brutal. I watched all 19 hours & 4 minutes of the event…😟 Here is some footage from the King of Kings event that shows the action and how he fished this mod. After watching all 19 hours of the event, they cut a highlights video that was 40 minutes long. 😒 Go Figure…

The action is bit intriguing as with attention to the retrieve you can make it into a jerkbait, and a dead walking bait. The soft Javalon tail is originally a tail accessory from the Imakatsu Replicator. Mr. Imae stated he had 4 key features of this mod that made it work so well:

1. The Replicator Javalon tail adds a lot of soft movement and action to the bait.

2.The removal of the plastic material in the joint allows this bait to fish tighter to cover and deadwalk with ease.

3. The Ryugi Quad hooks, cause the bait to suspend or super slow sink, keeping the bait in the strike zone.

4. The abalone shell paint job gave the bait a special type of flash that had a unique appeal in the off-colored water conditions.

The challenge with recreating the EXACT bait he used in the tournament is that exterior abalone shell colorway was an IK shop limited color release and was only released once. The cost to achieve the paint job in a mass production model was not efficient, as the paint had durability issues that were undesirable by Mr. Imae. They later produced an abalone color with the abalone reflection on the inside of the bait, but the flash is nowhere even close to the same. But we can still reproduce this mod here in America with some of the other unique IK paint jobs. The Entire mod can be done in 30 Minutes.

You cannot reverse the modifications once they are done, so warning to the warry. 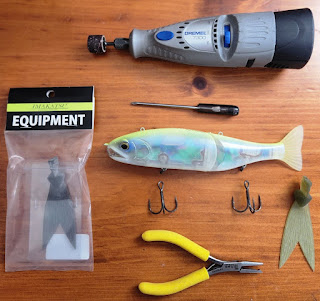 The First part of this mod is to remove the stock hooks, and get to grinding away, I used a handheld Dremel tool cut away the material till the sides met at a 90-degree angle at the joint.  If you remove the joint screw, you can easily Dremel out the bottom half of the joint. This doesn’t take Long but requires a steady hand. I do recommend you wear a mask and eye protection, the heat from the Dremel wheel causes the plastic to melt as your removing it, breathing plastic fumes and particles is also no bueno. 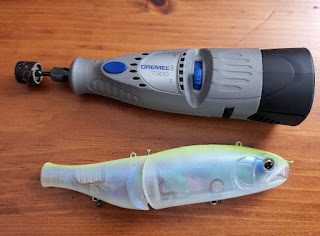 You should undue the screw that opens up the joint dampener. The screw that makes up the joint doesn’t come out entirely. So don’t try to force it.  This will give you more play when grinding the joint sides down with the Dremel. once you are done, just push it down and screw it back in. 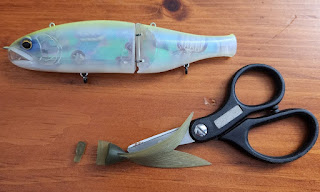 The next step is gluing in the Javalon Tail. It fits in the slot perfectly but doesn’t have the right action so Mr. Imae cut away the base material So that it fits flush to the base of the tail inset. 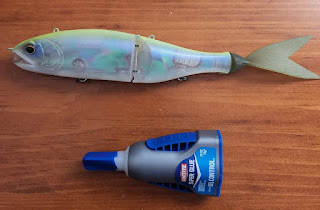 Use a fast set, and it will hold and never slip out. 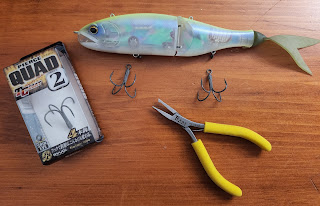 The last part is to attach the new hooks, it appeared size 2 Ryugi Quads were used front and back (the size of the hook was not mentioned in his blog) But I wouldn’t recommend anything bigger than a size 1 in the front and a 2 in the back. Imae mentioned in a previous post that he thinks as the Quad hook market gets bigger and better products hit the market, they will overtake treble hooks in the future for most applications. The Ryugi Quads are sharp, and rotate as they are mounted on a swivel that keeps fish pinned. They appear to be light wire but they are very strong and don’t bend easily. They also Add weight to the bait which will get an otherwise floating bait to very slow sink and nearly suspend. 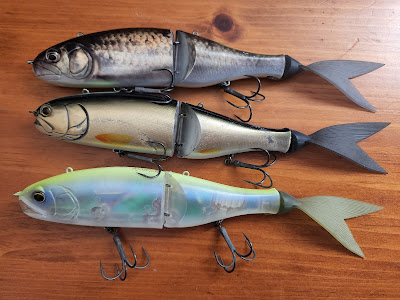 Now your new AyuRoid KoK mod is ready to fish!
I tried to target the same key areas Imae did. By Pitching it on the edge of shallow cover and working it quickly with long pauses in action. during this catch, you’ll see I use a lot of tip action when working the bait. I suggest you reel as you work the bait, or on a long pause the hooks will foul the line
One of the fun areas I found to fish this bait was around current and spillways where you can pitch it into an eddy or current break and dead walk it with and erratic retrieve. This proved to be deadly during the post spawn bite. In Southern New Jersey, once the fish Spawn, they tend to head up creek to follow the bait and they wind up in these areas where they feed heavily for most of the summer. 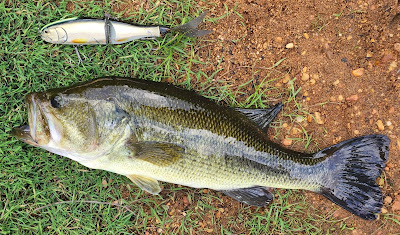 The Imakatsu Ayuroid is not a cheap bait stateside, Retail prices suggest they sell for $65. For me, buying one in the perfect color is worth it just for doing this mod. But you can find the AyuRoid overseas for much less in price, they also pop up on Japan Auction often and are well worth the buy if your shipping it back with other purchases.

This is an extreme bait mod that I don’t expect average people to do. But we aren’t average here. We are Enthusiast. If nobody, does it, then we must. These bait mods often are gateways into future tackle… 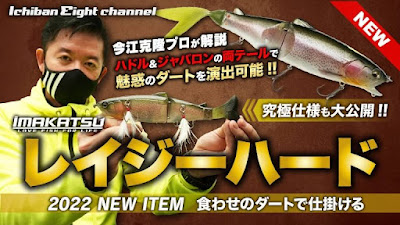 We must pay attention if we want to remain at the front of the pack. If anything, I hope it will give you the intuition to tinker with your own baits and explore your imagination a bit. For me, that is what it’s all about.

If you’ve made it this far, Thank You! I’ll be giving one of these modified baits away to a random member here who comments on this post.