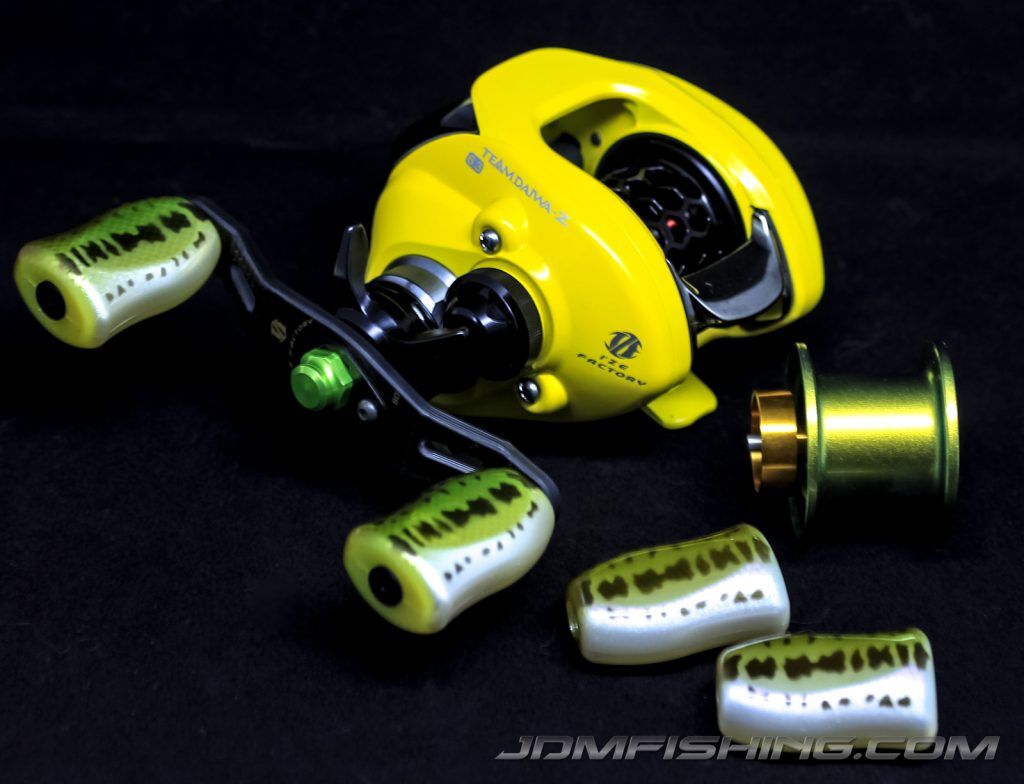 Magforce V, 3D Braking, SV, Fixed Inductor, the list of terms to describe the different braking mechanisms used with Daiwa Magforce reels goes on, but what do they mean?  You just picked up a fancy Z2020SHL with 3D braking, but what separates it from the braking in your Steez?   What makes a SV braked spool better for your application than a Fixed Inductor?  In this article I’ll break down the various terms, their mechanics, and how they apply to you and your fishing style.

First let’s get a basic understanding of how Daiwa’s Magforce system works.  There are two major components in a Daiwa reel that influence the cast, the brake magnets and the spool.  The brake magnets are literally just that, a circular set of magnets in the palm side plate of the reel.  The magnets are divided into two segments, a stationary inner segment and an adjustable outer segment.  The outer segment rotates in and out of the palm plate as you turn the braking adjuster on the outside of the palm plate.  As you increase the dial from 0-10 the magnet moves further away from the palm plate and closer to the spool in the reel.  What if your braking adjuster goes from 0-20?  Technically they all do, the older models went from 0-10 in half steps while some of the newer reels go from 0-20 in full steps, but the range of adjustment is identical.  So cool, your reel has a moving magnet in the side plate, but what does that have to do with the braking and ultimately the cast?  The magnet with its adjustable magnetic field influences the most important part of the spool to braking, the inductor. 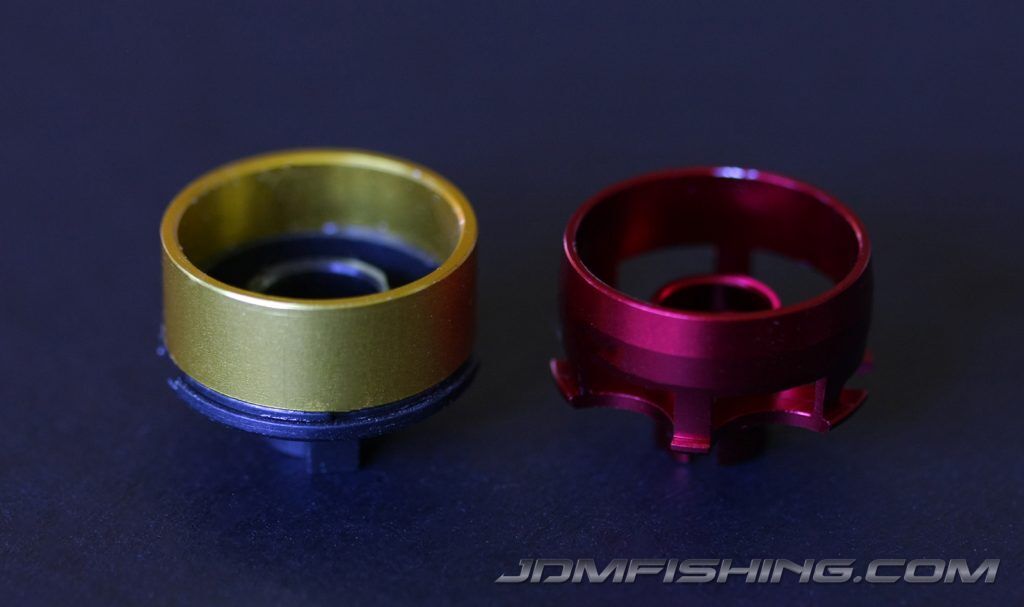 Now that we have a basic understanding of how the braking system works, lets dig into the different variations Daiwa has, their components, and their applications.

Fixed inductor spools were the first of the Daiwa Magforce lineup.  The inductor is permanently affixed to the spool shaft at a set location.  This consistency in the inductor location creates a very linear braking curve with predictable behavior.  When you cast and the spool speeds up the magnets immediately begin applying force to the inductor evenly all the way to max rotational speed and again until the spool stops again.  Being that the braking is extremely consistent a fixed inductor spooled reel is an excellent reel for beginners to learn on, but don’t let that sway you if you’ve been at this a few years.  Fixed inductor spools have amazing performance potential, most notably showcased by the original ZPI MG spool lineup.  By using different materials, spool shapes, and porting they were able to increase startup speed while maintaining the predictable control of a fixed inductor.  Fixed inductors are great for skipping lures, casting into heavy wind, or when casting light baits where you want a predictable cast.  Some fixed inductor spools lends themselves well to pitching and punching since they have the high startup speed desired with these techniques, but maintain extreme control. 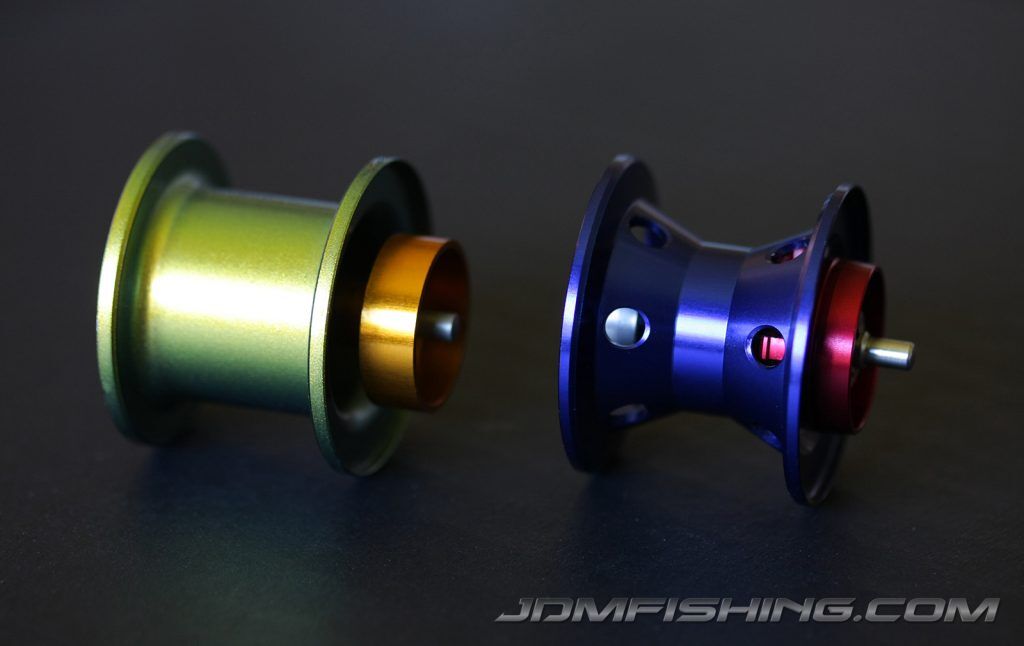 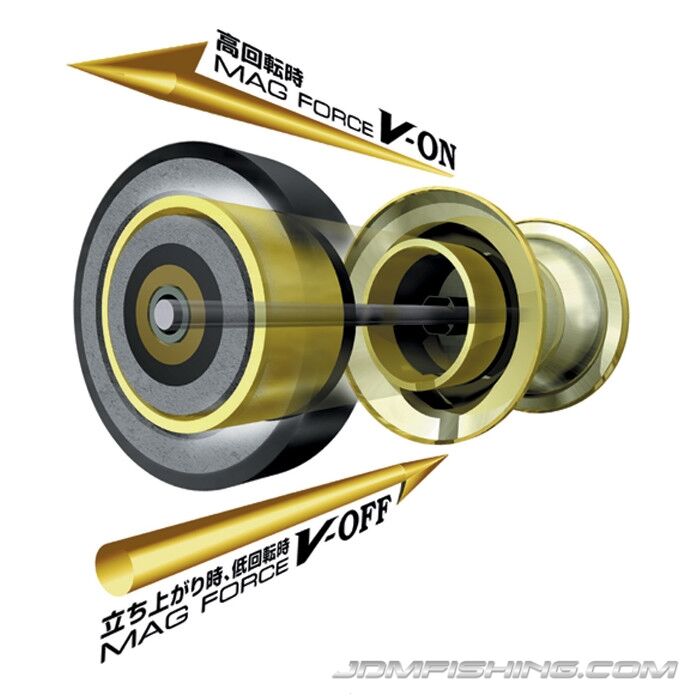 Magforce V introduces a variable into the braking equation, an inductor that moves.  Unlike in a fixed inductor spool, the inductor on the Magforce V spool slides up and down the spool shaft starting at the furthest point from the magnet assembly and moving closer as spool speed is increased until it reaches its maximum extension.  The inductor is held in place when stationary by a light spring which compresses as the spool spins and the inductor moves outward.  At low speeds the inductor will not move and provide linear braking.  As the spool speeds up and meets a certain speed the inductor begins its extension creating a curve proportionate to the spools speed.  At high speed the inductor will be in its fully extended position and again provide linear braking like a fixed inductor until spool speed drops.  This allows the spool to have minimal braking influence at slow speeds and allow faster startup while allowing a multitude of adjustment in the middle speeds for fine tuning your cast.  With that said you can see how different inductor weights, lengths, porting, tapers, and spring rates can allow one to really super tune the spools to cater to their casting needs.  So what’s with the “V”?  The “V” simply describes the shape of the spool, the spool walls taper towards a thin flat bottom.  Applications are endless with these variably braked spools, but they really excel at distance casting, pitching, and punching.  Skipping and casting into headwinds is made more difficult by the varying braking profile, but is still very doable.  These along with Magforce Z are the most common spools found in Daiwa reels. 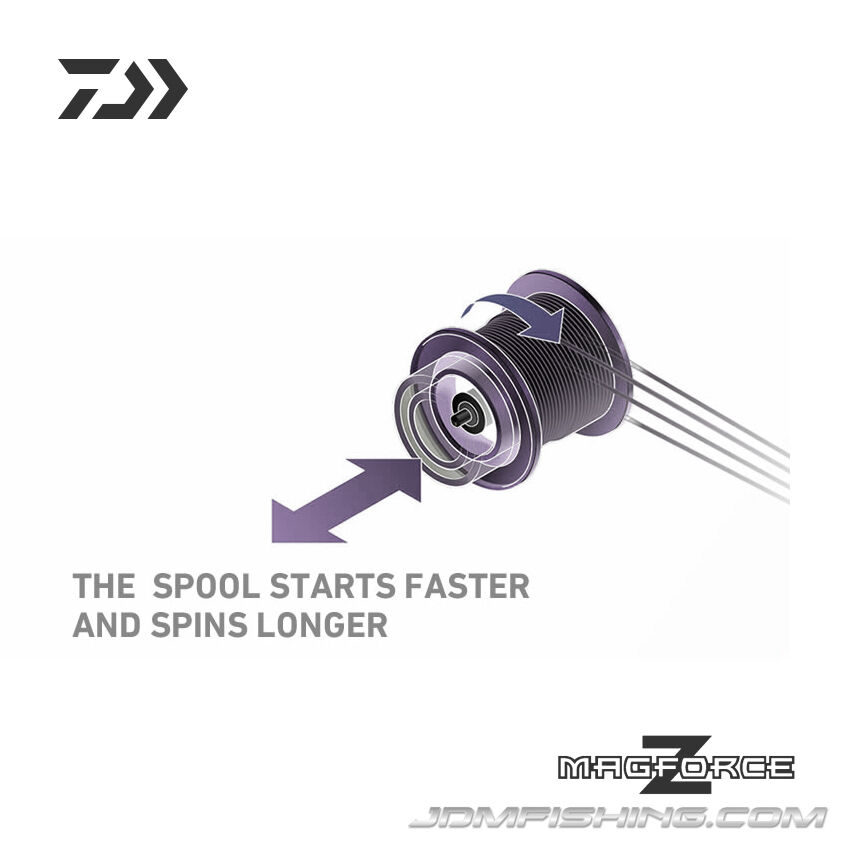 Magforce Z has the exact same mechanics as the Magforce V spools, but the spool itself has the traditional straight walls instead of the tapered walls of the V.  This allows more line and heavier line to be used, great for big baits or when you need extra line for long casts, however they are not solely relegated to these techniques and are featured in many Diawa reels. 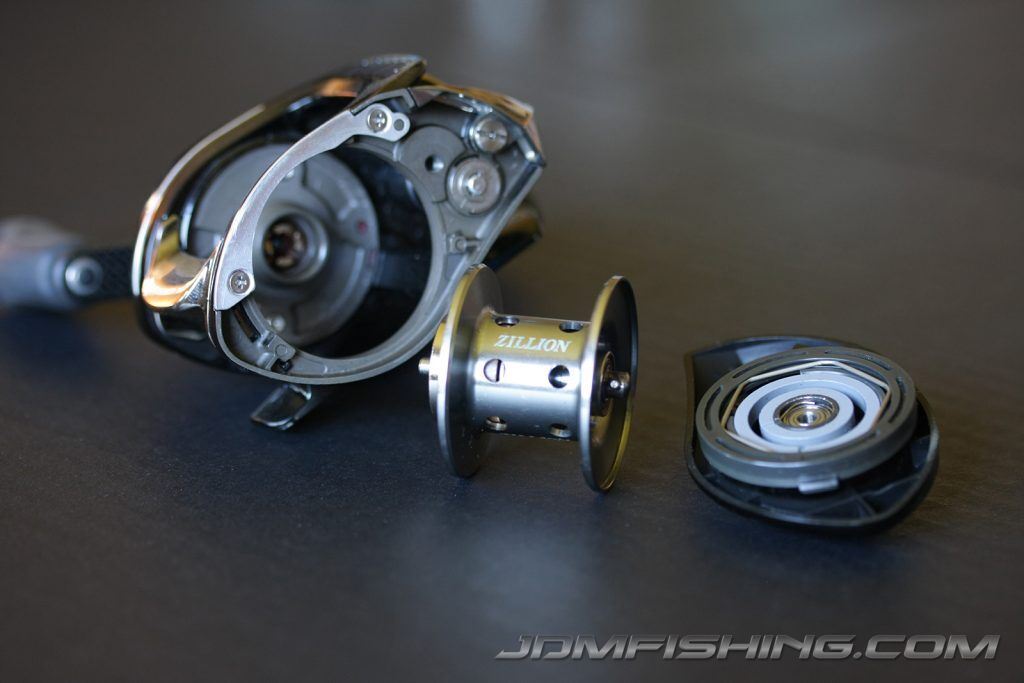 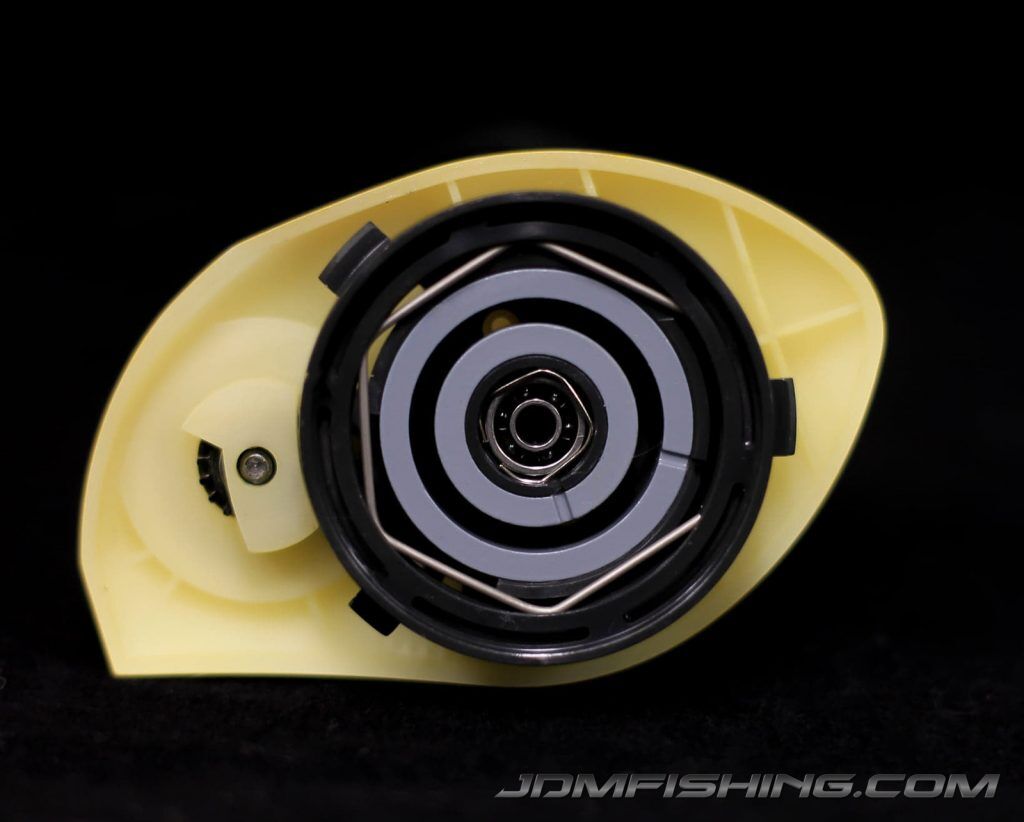 Daiwa’s Magforce magnet setup in the reels sideplate. Note the indents in each individual magnet, when aligned the reel is at full brake. 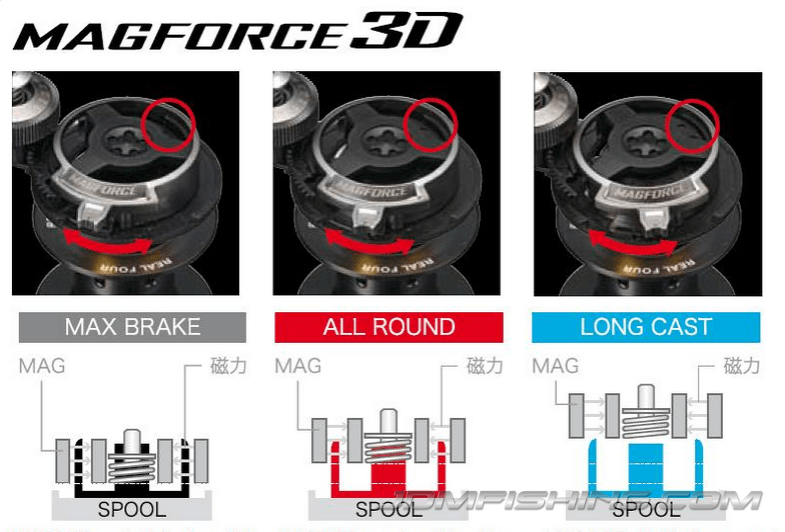 Magforce 3D introduces yet another variable to braking equation.  Magforce 3D equipped reels have a switch with three modes listed, Max Brake, All-Around, and Long Cast.  When the switch is adjusted the entire magnet assembly moves in or out of the palm plate varying the overall brake force while fine tuning is still available via the standard outside mag dial adjustment.  On Max Brake the magnet assembly is closest to the spool, All-Around it is in the “normal” position, and on Long Cast it is furthest from the spool.  With three brake modes and 20 mag dial adjustments, Magforce 3D equipped reels have 60 different brake profiles to choose from!  Magforce 3D reels come equipped with Magforce Z spools and are remarkable all around reels for any application, but still run into the nonlinear braking curve downfalls and few reel models feature the system. 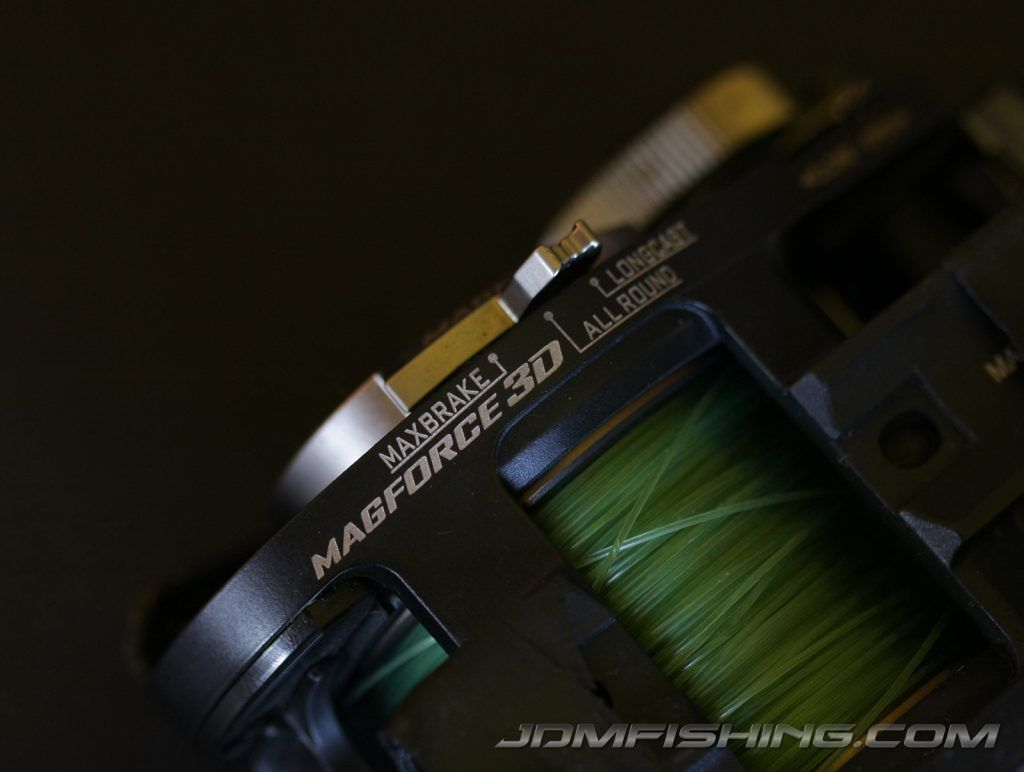 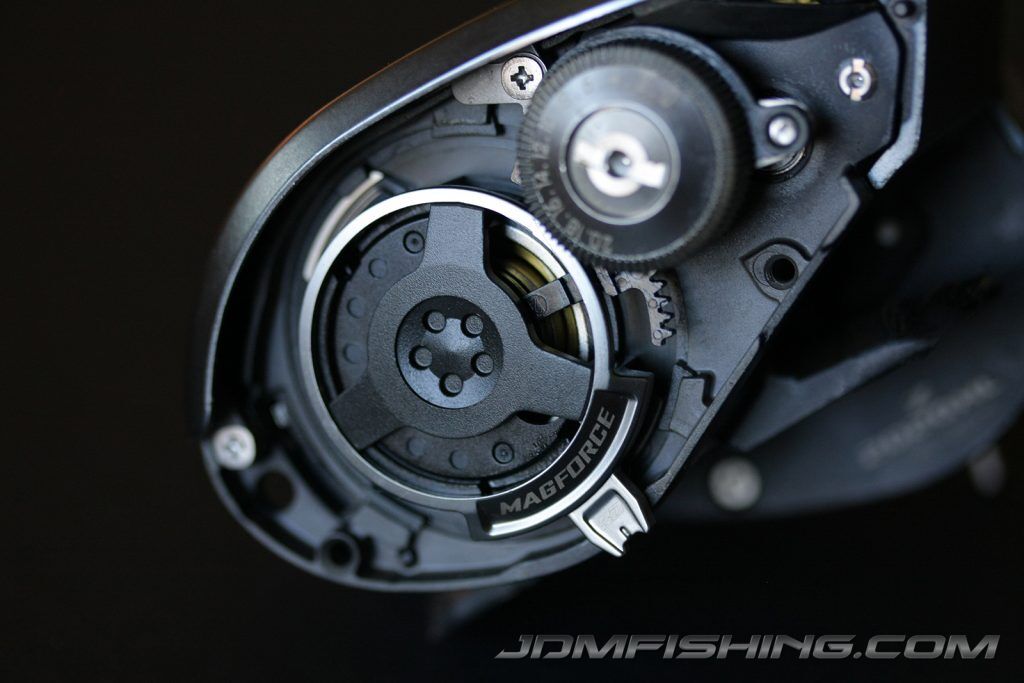 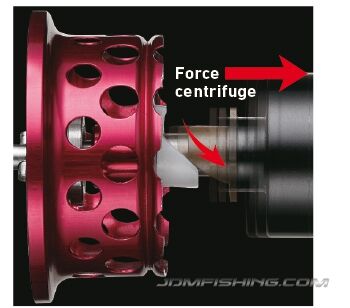 You will see both “SV” and “Air Brake” used as terms to describe brake systems, but they are synonymous with each other.  SV stands for “Stress Free Versatile”.  You’ll see SV used on Daiwa’s all around reels and the Air terminology used on the BFS orientated reels.   Air Brake was originally developed in cooperation by Karil Tuned Factory (K.T.F.) and Daiwa.  The SV system works very similarly to the original Magforce V/Z system with one small, but major tweak.  The inductor still moves up and down the spool shaft as the spool rotates, but instead of directly moving up and down, it twists up and down the spool shaft.  This twisting motion of the inductor creates a much more linear braking profile while still allowing the advantages of variable inductor placement.  SV spools are renowned for their casting ability coupled with extreme control.  Applications for SV spools are endless as they can cast long distances, pitch, skip and cast easily into headwinds. 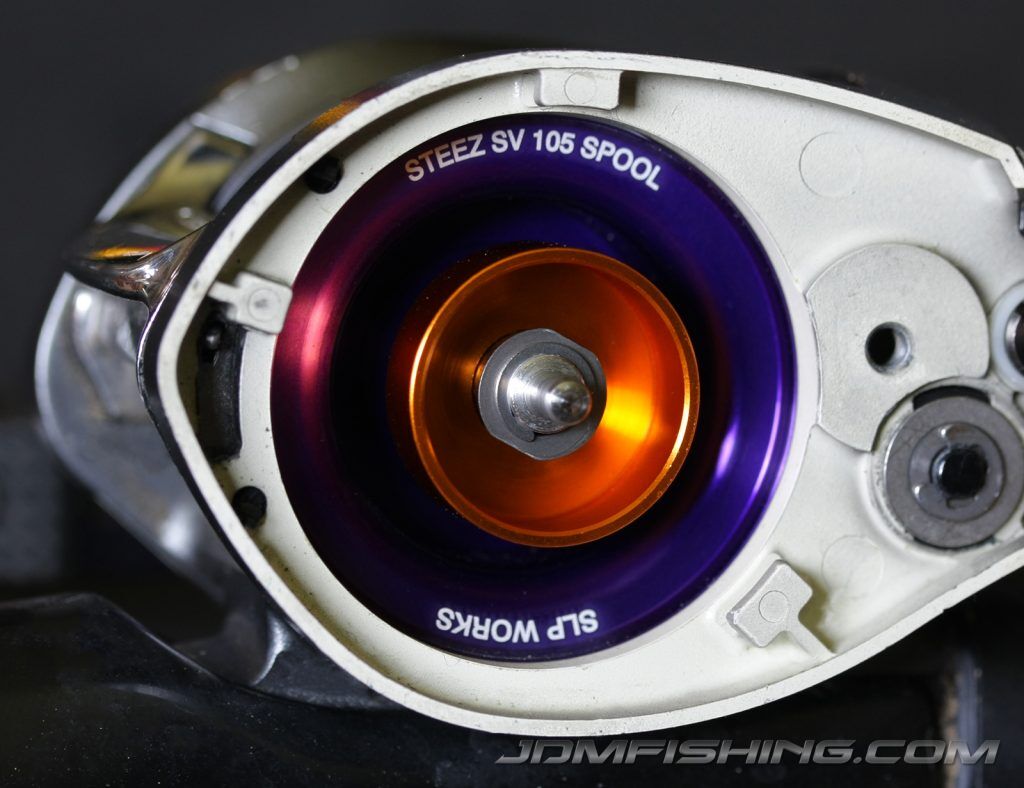 A Steez SV105 Spool loaded in a Steez 103SHLA. The SV/Air Brake system utilizes an inductor that rotates as it moves away from the spool, unlike standard moving Magforce inductors.

That concludes the introduction to Daiwa’s Magforce systems.  In later articles I will dig deeper into not only the braking system itself, but what spool shape and weight has to do with casting performance as well as the multitude of inductor tuning variables to gain every last inch on performance from your spool. Stay tuned!