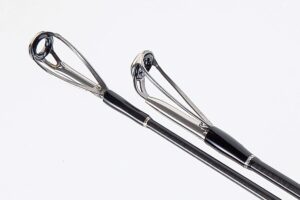 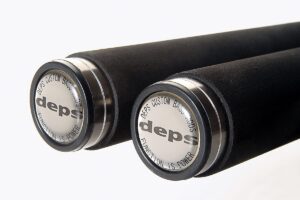 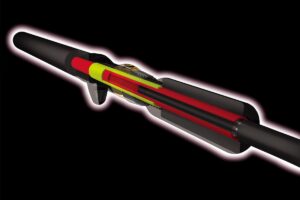 “Sidewinder Strong Mind” with transcendental power far beyond imagination.
The “Lure weight ~ 2 kg” shown is a limit that humans can cast lures, but in fact, it has an unprecedented blank power that the gauge is shaken off in the load test and it is impossible to measure.
This extraordinary blank power is the power needed to control the giant bait.
If the rod power is inferior to the super heavyweight giant bait, the action that the trailing bass just does not look like becomes an action, but if you use the super dreadful power of “Strong Mind”, you will not lose to the super heavyweight giant bait. , Creates a “sharp” action and enables jerk with an initial speed where many bites occur.
In addition, even the thick shaft hook used for bites and giant baits at long distances where hooking power is difficult to transmit has high power transmission power that reliably penetrates the upper jaw.
Strong mind that exists in this world only for casting super heavyweight giant bait.
It is the ultimate specialty rod that can be handled only by those who have mastered the giant bait, not the specifications that anyone can handle.

Raging basic performance, lonely strong arm.Aim for the big bus. And if you hang it, you will catch it. The pursuit of the basic performance of the sidewinder, which is too straight. The functions and characteristics created from it have never lost sight of the essence that a custom rod should have been sought after.
On the contrary, the rugged details that heeded off the decorations that were not needed to “catch the bass” without hesitation were a glimpse of the rod-making process without hesitation.
Only the rigid stance that goes on my way and the hidden potential that can exert its power only after being mastered are thoroughly pursued.
Original guide system and blanks selected from the priority of rigidity and high sensitivity, including composite blanks made of 30t + 40t graphite, which was calculated from the balance of power and torque without introducing new materials or increasing tonnage unnecessarily. A well-thought-out setup with carefully selected details such as a carbon connector and grip end balancer that amplifies the vibration from the vehicle and transmits it directly.

There is no kind design or even consideration for everyone to use. However, on the other hand, the reason why it does not feel awkward or uncomfortable is that the function as a rod is summarized at a high level.

In any case, the kind of status that can be obtained by improving the skill and mental aspect of the user and narrowing down to the bat in an instant, the impression when a strong fight is screwed down is only the real thing. It must be the result of high potential and certain quality.
I don’t know how many anglers will be able to meet that shock, but if it was a sidewinder encounter, I would know the meaning of this rod’s existence.

The pursuit of excellent grip performance during rough fights and the hard touch where the more sensitive index finger touches the hood cap make it possible to feel the material of the bottom and even the slightest change in vibration. Seat “adopted.

HGC-64XS, HGC-77XS “FujiTCS reel seat” + “TBS fore grip” dedicated setting is a hard jack that is frequently used in moving lures, and a unique soft touch that reduces the strain on your fingertips during continuous twitching. arrange. 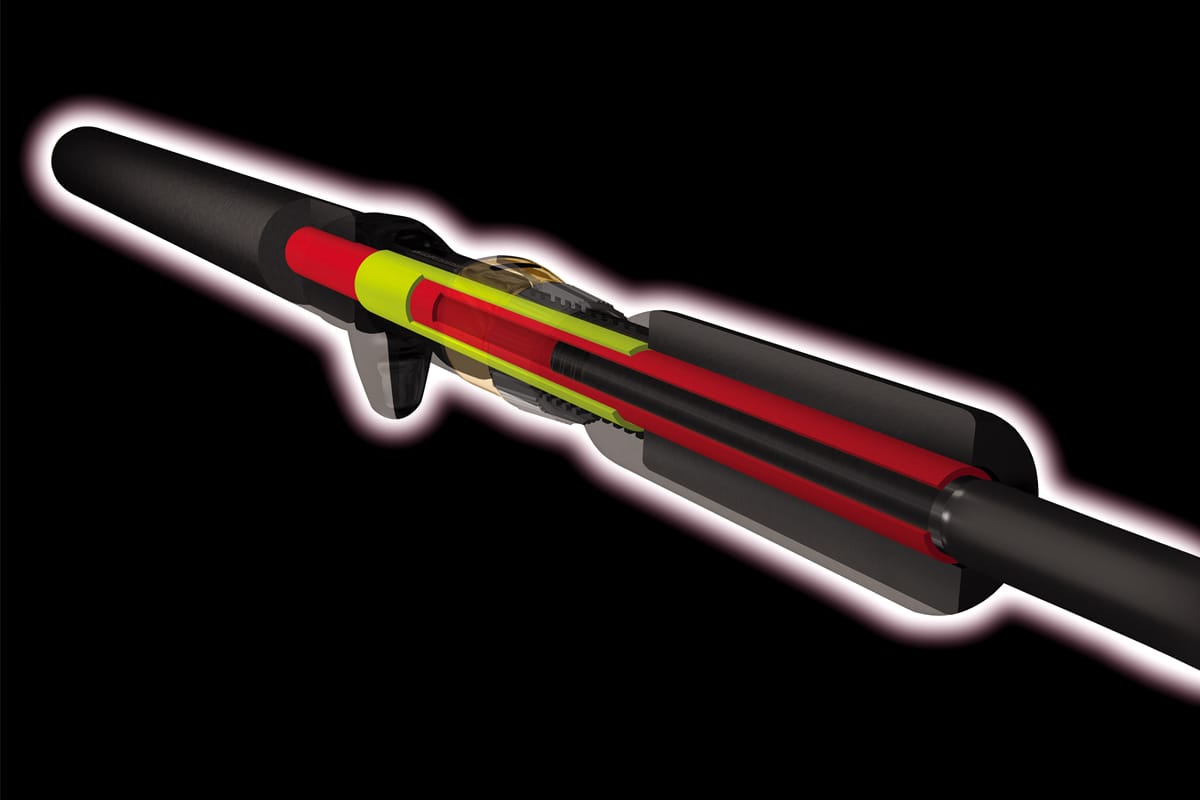 A carbon connector that maximizes the blanks power and makes everything feel direct.
The carbon connector built into the joint between the reel seat and the blanks increases the rigidity and dramatically improves the vibration transmission capacity.

Sensitivity + balance up. Machine cut/grip end balancer The
aluminum machine cut balancer that amplifies and transmits the sensitivity by the synergistic effect with the carbon connector also plays the role of a counter weight that reduces the weight feel when the reel is mounted.

The sensitivity is obviously different. Double foot titanium frame to increase rigidity
A unique guide setting with a lightweight and highly rigid Fuji double foot titanium frame SiC guide.
The high rigidity that suppresses the deflection and guide shake of the frame gives the blanks a sense of unity, and is equipped with clearly different high sensitivity and excellent durability.
The HGC-77XS and HGC-80XR have Fuji T-MNST ocean top guides that consider the use of PE lines.
It has the effect of reducing thread entanglement on the tip, and has a heavy duty specification that can withstand overuse. 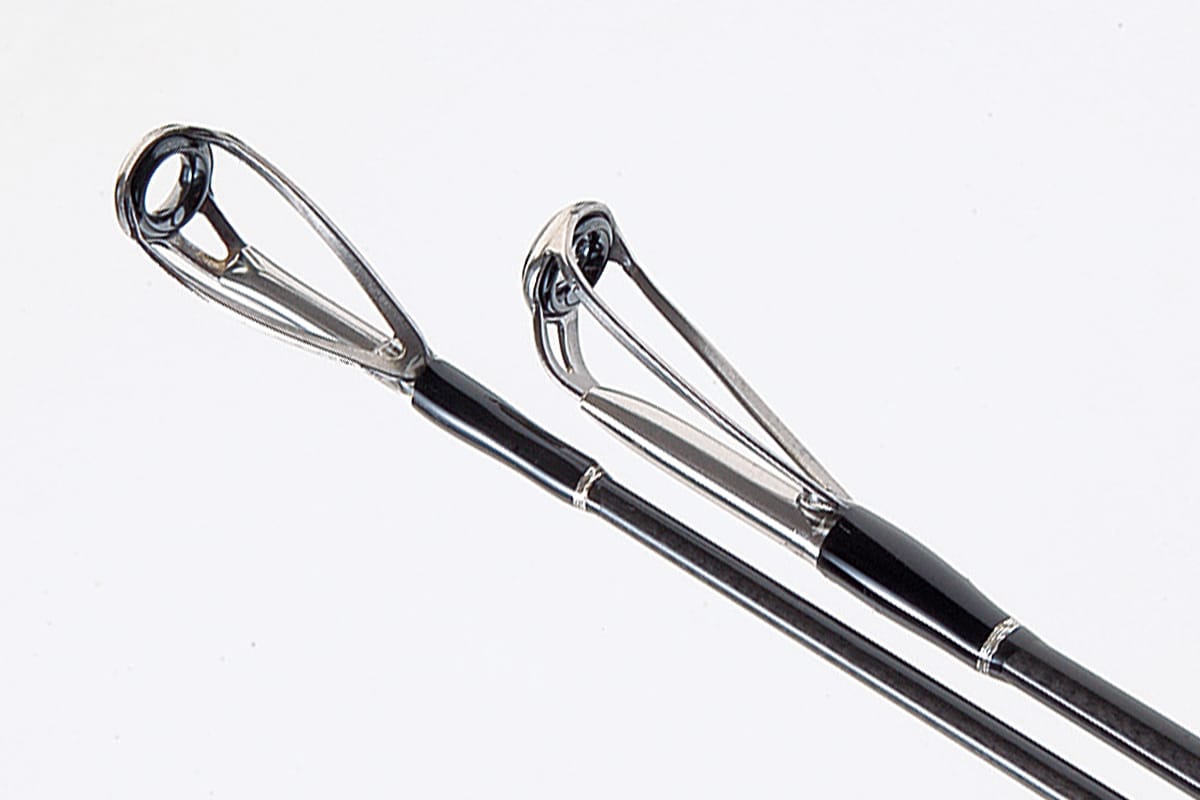